There are few better things in this world than spending time with friends. As an expat, you tend to form bonds pretty quickly, sometimes deeply. They're impactful connections due to the shared unique living experience. I've lived in Japan twice now, moved to several major U.S. cities, and in that time I've been on a few getaways with the girls. This trip to Sapporo was particularly special, though, because it was a personal bucket list item for Japan.

And enjoy we did! Located in Hokkaido, an island known for its seafood, milk production, and lavender fields, Sapporo is the capital of this mountainous region. Famous for their beer and skiing, the reason we flew up for a quick weekend getaway was to attend the 71st annual Sapporo Snow Festival. It was unreal. Having never lived above the Mason-Dixon my memories of snow are few and far-between. Sapporo made up for this in spades!

We flew out of Tokyo while it was still dark, learning our lesson there while leaving the more temperate winter of the city for the very snowy and icy cityscape up north. Our hotel, Unwind Bar & Hotel, was absolutely precious, perfect for a night away, cozy, clean, and best of all, centrally located. Thank you Nishka! It made it easy to check right in and head towards Odori Park for the snow sculptures. 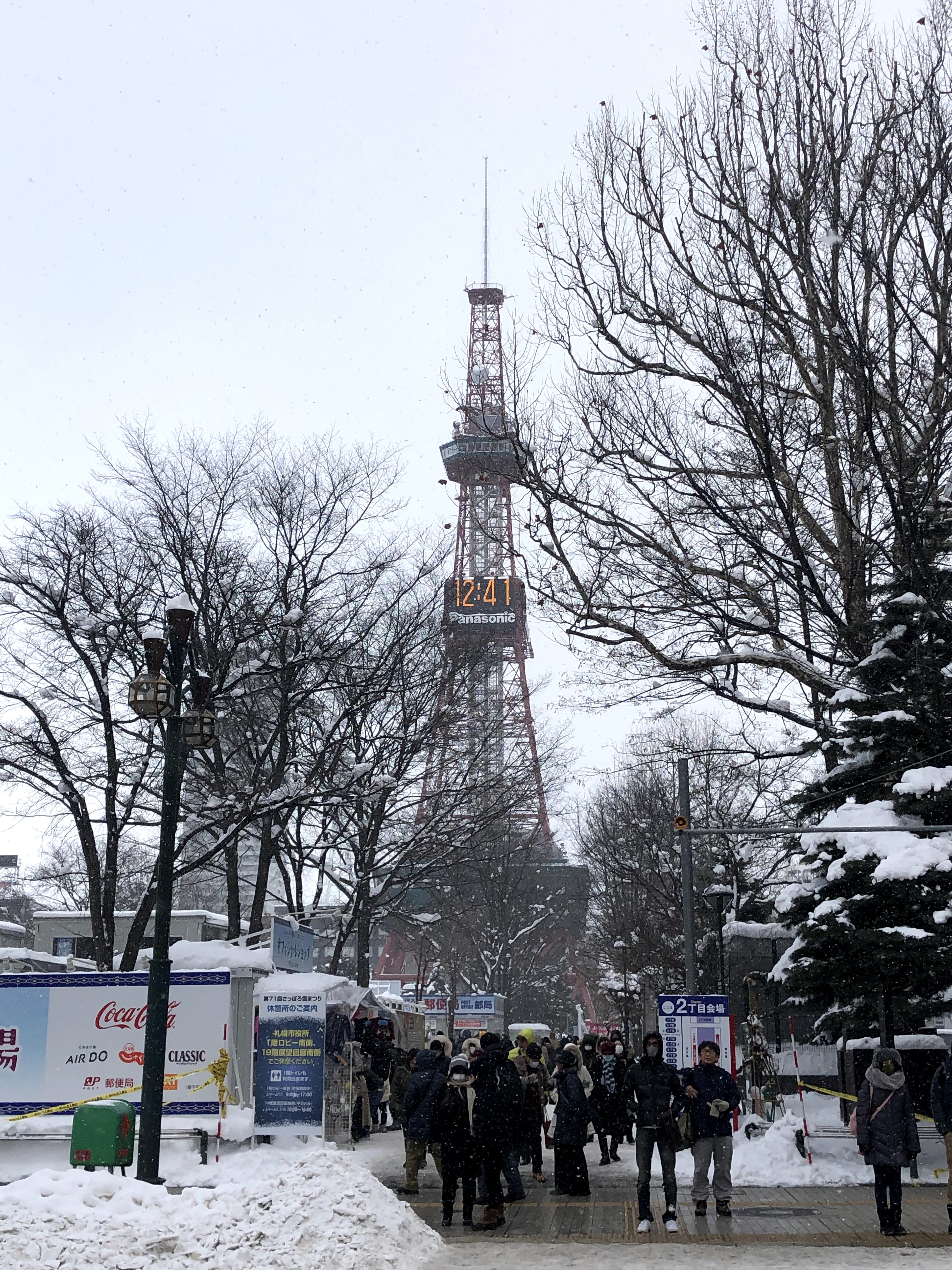 Of course, before we did that we had to enjoy a really hot meal. We were starving, it was cold, and we were all itching to eat some really good food. In this instance it was a bowl of ramen on Ramen Alley-buttered corn ramen for some of us since it's a local specialty. We filled up, warmed up, then rolled out. We were not disappointed when we arrived at the park. Not even a little.

For half a moment it was like being a snow globe: the snow had started falling, whipping around us pretty quickly as if the city were being shaken. I thought it was beautiful, adding to the magic of the festival. It eventually passed-as did the clouds in the sky-and soon there was nothing but sun. The crowds weren't big at all, and from mulled wine to donuts on a stick we ate, we drank, we ran into friends from Tokyo, and overall were really impressed by the skills of the snow sculptors.

Enjoy these snapshots from the Snow Festival!

(My favorite snow sculpture because TURTLES!! And it won first place in the sculpture contest!)

Anu nailed the group selfie, right? This was at our halfway point-the point in the snow festival where we wanted to continue on block after block, enjoying sculpture after sculpture. But eventually we did want to sit. We wanted something hot to drink and a warm place to enjoy it. A few cups of coffee and tea one cute cafe later, our group went in two directions: back to the hotel or to the ice festival, a much smaller celebration of winter located by Susukino Station.

One of the more compelling reasons a few of us continued on was to see the light show. I use the word "show" loosely since it was a more an illumination of the sculptures at both locations, but it was worth it. The Ice World was located in the middle of the street, all closed down for safety. It was here that the February Girls (the three of us celebrating our birthday's over the span of this week) decided that between the two attractions, the detail work of the ice sculptures was infinitely more impressive.

It seemed this way because the detail work held up much better than it did with the snow sculptures. Perhaps it was the grand scale of those back in Odori Park or the temperature, but whatever the reason, while smaller in display the Ice World delivered with both greater creativity and incredibly ornate design. There was also the addition of an ice bar and slide, which we may have all taken a ride on. That added to the experience as well.

All in all, the trip was a a huge success and so incredibly fun! We did what we wanted to do, enjoying the sights, sounds, and flavors of Sapporo and its winter festivals. We were all tired by the end, ready to return home, but it was an event I will always highly recommend. Just be sure to book early as the festival runs only a week long and since it's well known, everything gets reserved quickly.

Thank you my friends for a memorable time away.

And thank you Sapporo! We will be back.